Being and Slow Time Exhibition 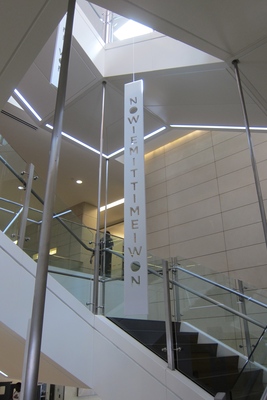 WASITACATISAW (was it a cat I saw)

"Up, Down, Same Thing" is Buddhist nun Jiko's koan-like comment while watching surfers. The paradoxical logic that defies linear thinking finds a linguistic analogy in palindromes (back/forth, same thing). Palindromes align with the space (in the stairwell, "up, down, same thing") and concept of slow time (linear flows of language and time are arrested as they transform into repeating loops or cycles). Styrofoam pieces suspended in the virtual vortex of the spiraling stairwell evoke the plastic garbage patches stuck in calm spaces within the oceanic gyres, a central motif in A Tale for the Time Being.