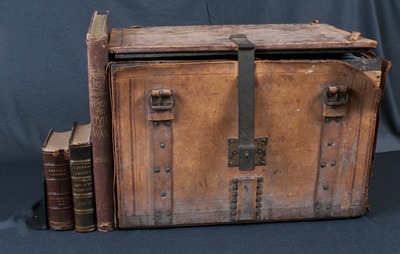 More Than Just a Box

What can a Union officer’s chest tell you about the Civil War? Its internal compartments, labeled “Military,” “Accounts,” and “Clothing” provide a glimpse into officers’ duties and responsibilities on the battlefield. Charged with training, organizing, and instilling discipline into the daily lives of the soldiers, officers at every rank used chests as mobile toolkits that allowed them to do the business of war. This strict attention to order helped transform civilians and volunteers into the formidable war machine that ultimately won the war. The chest on display may have been owned by General William S. Rosecrans, whose grandson graduated from St. Vincent’s College, the institution that eventually became Loyola Marymount University. This legacy to a Civil War general remains visible on campus today in the form of Rosecrans Hall.