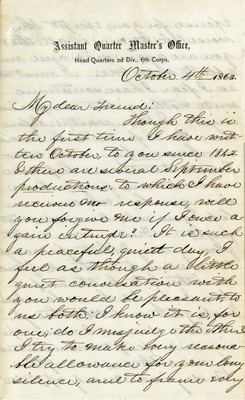 Quakers endured much hardship in the Civil War because of their historic commitment to absolute pacifism. In a letter to his girlfriend, W.B. Stoems mentions three active “members of the Society to which [he] formerly blonged [sic]” in his regiment whom he fears “will suffer…rather than swerve from what they think is right.” Stoems was not the only witness to this conflict between war and peace. Other accounts tell of Quakers who were dragged by horses, hanged, and even executed. Despite the pressure to compromise, most Quakers adhered to the pacifistic principles of their Religious Society throughout the war. Revealing some of his own hesitancy toward the war, Stoems writes, “If they are right, then I am not and am lost…”