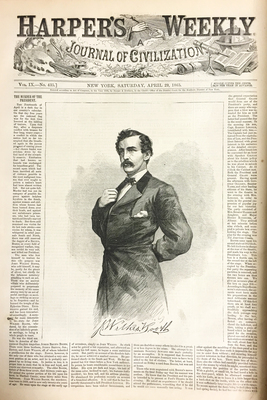 “Stricken Down by the Foul Hand of the Cowardly Assassin”

The assassination of Abraham Lincoln at the hands of John Wilkes Booth gripped the nation. Illustrated newspapers in the North, such as Harper’s Weekly, spread the news and depicted the disastrous crime. They created powerful images of both Lincoln and Booth. Lincoln was portrayed as a martyr and a father figure who had been stolen from the nation. Booth was shown as a heinous assassin whose crime both horrified and fascinated the American public. While the Harper’s Weekly article describes Booth as a villain, the cover image displays him as mysterious and almost heroic, fueling his “infamous notoriety.”