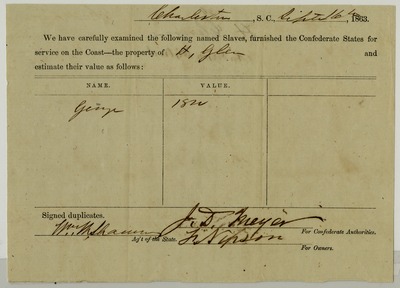 Confederate Impressment Receipts, Alabama and South Carolina, 1863-1864 Unable to properly maintain its army, the Confederacy resorted to the system of impressment, taking private property for its own use. And while the government seized general war supplies, such as weaponry and food articles, it also took slaves. Impressed slaves were contracted into hard labor, such as building military defenses, with receipts like the ones shown here, made out to slave owners promising payment for the use of their human property. Many owners were never paid, as the Confederate economy crumbled. Often, impressed slaves were sickly, injured, or dead upon return to their masters. Listed alongside bacon and axes, slaves became just another war supply, as they were forced to help build defenses for a government committed to maintaining slavery.