Pamphlet of Oration, delivered to the Rochester Anti-Slavery Society in Corinthian Hall by Frederick Douglass 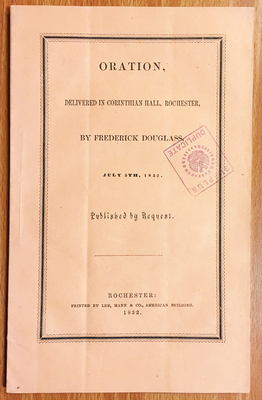 "The Fourth of July is yours, not mine" -- Frederick Douglass

This pamphlet contains abolitionist and former slave Frederick Douglass’ famed oration that denounced the moral injustice of celebrating liberty in a land that permitted slavery. It was distributed to 100 members of the women’s anti-slavery society that hosted Douglass’ address. While Douglass denounced the hypocrisy inherent in a slave-holding nation celebrating its freedom on the Fourth of July, he did not reject the Founding Fathers. Instead he praised their ideals but warned that the current generation must legitimize America’s founding principles. Thus, Douglass told the 1852 audience that on the Fourth of July “[y]ou may rejoice, I must mourn.”